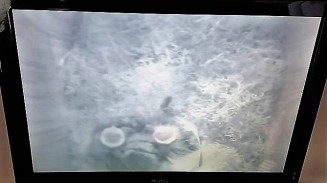 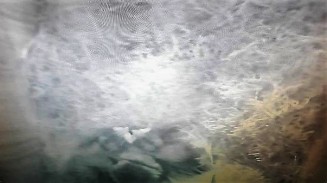 What was to follow, I could not have predicted and I wish I could have prevented.  My mother took ill.  A chest infection turned into pneumonia which resulted in chronic kidney failure and her departing from this world.

My life changed forever and will never be the same.  She was the one who inspired me to take an interest in so many important things in my life.  She loved watching birds until sadly her eyesight prevented her from really appreciating the bird life which her bird feeders attracted.  She spent a lot of time and money feeding the wild birds and loved spotting something new and exciting, much like myself.

When she took ill, naturally my priorities laid with her and my young children.  I didn’t check up on the nest for a few days and when I eventually did, all traces of parent birds and chicks were gone.  Only one unhatched egg remained. 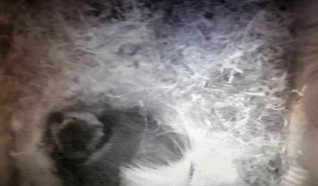 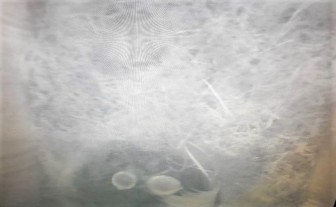 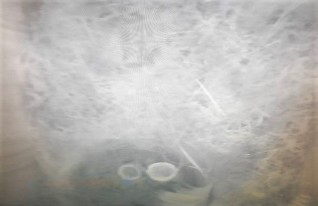 It is now a wee while since I last posted regarding this year’s nest.  The very next morning I heard rumblings downstairs.  Twin 2 came upstairs to excitedly tell me the Daddy bird was back feeding the Mummy bird.

I was pleasantly surprised but, alas, I never saw evidence of this.  Old Pop said it had been there feeding the female.  Despite this and watching on camera, on screen, for several days I did not spot a second bird.

One evening the bird sitting on the nest seemed to be slightly alarmed and was making some noise.  I went outside to investigate and also watched on camera inside.  Everything Settled down and seemed to be OK.  I think she was warning off another bird.

I began to realise this Mamma was a single Mum and was glad she only had 4 eggs.  Four baby chicks to rear was enough for a single parent bird.

I watched daily to see if any of the eggs were hatching.  On 29 May 2017, at around mid day, I put on the TV connected to the camera and discovered we had 2 chicks.  Two very poor looking chicks, hardly visible.  They resembled little alien birds as all chicks do to begin with.  Later that evening, I watched with the twins, as the third chick appeared to be hatching.   I tried to photograph and video some footage on 29 May and 30 May but never got round to any more photography till today.  Due to some very difficult events which occurred last week, bird watching, reporting and photographing had to be put on hold.

The other egg never hatched, just like last year – one remained unhatched.

I was aware that one parent raising 3 chicks was probably difficult enough and was slightly relieved the other egg didn’t hatch.

Over the course of the week, it was noted however that one chick was missing.  I searched around outside close to the nest box but saw no evidence of it.  I only noticed some pieces of broken egg-shell which had been discarded from the box.  Last year the parent had been seen eating the shell, apparently a source of protein.  This year I am wondering if the birds hatched too close together and for safety she just had to ditch the shell quickly.   Last year I noticed one bird being ejected from the nest.  This year I don’t know what happened to the third chick.

Over the last few weeks when visiting the local shop, I bought bird seed and even a small supply of peanuts.  Aware that young chicks find it difficult to digest peanuts, I decided not to supply them, despite knowing they are a great source of energy and my wee Blue Tit was going to need energy.

I filled up a seed feeder and put out more fat balls.  The seed was vanishing fast and I kept re-filling the feeder.   I was rewarded one morning with a beautiful male Bullfinch resting briefly on my washing line, observing the empty feeder.

I gasped at the sight of it (as it is definitely one of my favourite feathered friends) and said out loud to myself something like “God that is a beautiful animal!” I reminded myself it was not really an animal and instead a bird.  I never had the pleasure of witnessing the beauty of a Bullfinch before coming to live in this Village.  I still remember spotting my first one on one of my apple trees one year.  I was coming down the stairs and was amazed to see this truly beautiful pink exotic looking bird.  I was sure it was some rare delight from abroad or an escapee from an aviary or cage.  The pink was so bright it took my breath away.

The remaining 2 chicks are growing quickly and are very demanding.

Another downside to my life with birds in recent times came when doing reading homework with my daughter one evening recently.  There was an almighty bang which frightened both of us.  I really thought a brick was being hurled through my front Living Room window beside my daughter.  I soon realised it was a poor young Blackbird that had hit the window with tremendous force.

I rushed outside to see it, sure it would be dead.  It was lying on its back so I carefully put it into the recovery position and stroked its breast as if to massage its heart.  The visible eye was half-shut.  I stroked its little head and then left my Son to guard it from cats and other predators.  Both of the twins wanted to touch the bird and I told them they could as long as they were gentle.  I was pretty sure the bird was dead anyway.  They were amazed at how soft it felt.  I think it was their first time touching a bird.

I have previously gone outside and checked on birds that have hit the window, put them into the recovery position, left them to rest, guarded them from predators and rubbed their chests.  I have had some success with this before and been delighted to see the birds fly away unharmed.  This was never going to be the case with this young Blackbird.  It hit the window way too hard.

In the past, I used to bury birds that died in my garden and pop a little spring bulb above them to flower the next spring.  As the years have gone by, I often thought, if anyone in the future dug up my garden, they would wonder what on earth had been going on in my garden when they found so many bird skulls buried.

Gradually, I realised if I just left them, some creature in the night would go off with dead birds.  Maybe a hungry animal was getting fed!  I decided to leave this dead bird.  The weather was extremely warm.  There were no takers, so after a few days, I went to move it with a trowel.  It was moving with maggots, some white, some blood covered and it smelt.  There were even maggots on the grass below it when I lifted it up.  I just gently threw it over my back fence, close to the nest box, knowing it may provide food for my Blue Tit and its chicks.  In nature, sometimes there is no waste.

So while I am here trying to help birds reproduce, others are dying in my garden.  Still, I will keep going because that is the way I am.  Many of you will think I am crazy, maybe I am, I just want to save as many birds and animals as I can.

Today there was a bird sitting on the 4 eggs.  I am assuming it is the female.  The bird came and went, never being away for too long.  No sign of the sidekick coming with food!

I wonder, where is the Male?  Has something happened to him?  Is that why there are only 4 eggs?

The nest box is on a BT telegraph pole, there is evidence of BT men being in the garden when I was out.  New labels pinned to the pole.  I noticed that today.

Have they scared the male?  Has he gone off with a bigger egg producer or been promiscuous?

How will one bird keep the eggs warm and feed itself and possibly 4 chicks?  How can I help it?

Many thoughts have run through my head today but I am really worried for this Blue Tit and the eggs.

Could something have happened to the female and is it the male who is looking after the eggs?  So many questions and yet no answers.  The male and female look the same, except when they are together and the male looks bigger on the camera.

I worry about the situation and wonder if any of you can offer some advice!

No further eggs have been laid.  After the fourth egg was laid, I thought it would be good if this pair stopped at 4 eggs.  Last year many more eggs were laid, one didn’t hatch and only 3 chicks flew the nest.  I am aware that Blue Tits tend to “lay all their eggs in the one basket” – they only usually have one nest, with lots of eggs, giving it one shot to produce as many offspring as possible.

With 8 or more chicks to feed the parent birds have to be fit and busy to be successful in rearing most of their young.

If this pair lay only 4 eggs and 3 hatch and fly the nest I will be happy.  It is soul-destroying to see the parent birds throw out weak or dead chicks from the nest and to see a form of cannibalism when the parents or the other chicks attack and eat the weak chicks.  So I am happy with 4 eggs – hoping all chicks will go the distance.

Yesterday morning there was no definite sign of a third egg having been laid overnight or in the early morning.  There was a little grass or moss pulled over part of the nest hole though and it was difficult to tell.

While checking later in the day a third egg was very noticeable and therefore I think was laid in the afternoon yesterday.

This morning I have noticed we have a fourth egg.

Apologies, once again, for the poor quality photography, mainly due to inexpensive equipment.  We are considering in investing in a better camera for inside the nest box for future years.

This morning, we discovered a second egg had been laid.  This year’s egg laying looks like it is forming the same pattern as last year.

We await the third and maybe fourth tomorrow.  🙂 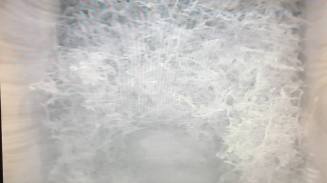 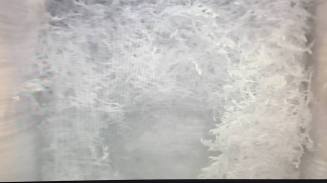 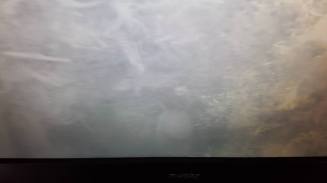 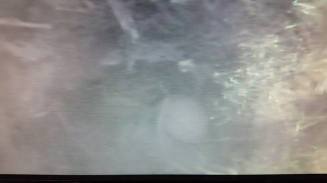 In April, there were Blue Tits showing interest in our nest box but we never really got round to re-connecting the camera to the television.  I became really aware of increased activity towards the end of April and beginning of May and we eventually got the camera connected to a spare TV.

Two Blue Tits started to build a nest and on Wednesday night one of them roosted for the first time in the box.

I have just discovered a short while ago, while checking the camera, that an egg has been laid between last night and this morning.

The Blue Tit chicks had flown the nest before this time last year so things are happening a little later this year, perhaps due to the colder weather lasting longer this year.

I have attached some photos, apologies for the very poor quality.  Basically I have just been taking snaps of the TV screen with my phone.